He is a blue anthropomorphic biped bear.

Settlers that came too New Texas, he and his sister, Marris Woo, bumped into Handlebar while running in Fort Kerium square. Thinking that being a member of Carrion Bunch would be good, he and his sisterer were to plant a sleepy bomb, to help trap the Shaman, but they changed there mind.

Bravestarr and Thirty/Thirty saved them, from drowning in the underwater river near Starr Peak.

Later on they got a big brother Handlebar, and Ben under oath told the story about the sleep bomb[citation needed] 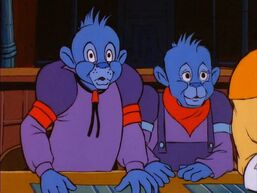 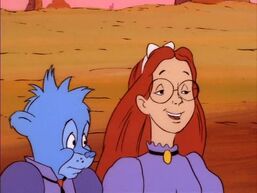 This article is a stub. You can help Bravestarr Wiki by expanding it.