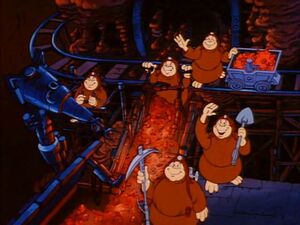 Kerium was a precious and widely sought after sparkling red mineral that could be found in abundance on the planet New Texas. The discovery of Kerium caused a "Kerium Rush" towards the planet by settlers from Earth and many other planets.

(Kerium is a fluorescent orange crystal more valuable than gold that is often the focus of the conflicts between BraveStarr and Tex Hex.) [1]

Kerium was mainly used for powering spaceship engines. But many other uses were constantly being developed. Ally Kingston for instance attempted to use liquid Kerium to make blind children see. (Memories)

In Fort Kerium,  Kerium was used as a means of currency.

The Fort Kerium bank was constantly in danger of being robbed because of the great amount of Kerium held within. When Dingo Dan terrorized the city in his Dune Buggy, he used a special Kerium magnet to pull the Kerium right out of the bank vault. (Shake Hands with Long Arm John)

Dealer, a drug pushing Dingo, charged three Kerium nuggets for one vial of the drug Spin. (The Price)

There are different types of Edit

This article is a stub. You can help Bravestarr Wiki by expanding it.

Retrieved from "https://bravestarr.fandom.com/wiki/Kerium?oldid=6883"
Community content is available under CC-BY-SA unless otherwise noted.