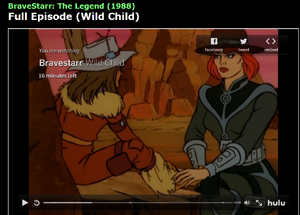 As a baby, he wandered into the desert. His parents searched everywhere for months, but finally left New Texas, destination unkown. The baby was found in the Badlands by Dingoes and raised as one of them. He became known as "Wild Child" and developed special powers not unlike his Dingo 'family', including the ability to leap great heights and to recognize different people and species by scent. (Wild Child) Like all Dingoes, Wild Child was given a special medicine at a young age by the Dingo Llama to make him imune against the illness of the Fever Flower. (Call of the Wild)

Wild Child's existence was first noticed by old Zeke when he was fleeing from a pack of Dingoes. This prompted Marshal BraveStarr, Thirty/Thirty and Judge J.B. McBride to head into the Badlands. Fleeing after a skirmish with a pack of Dingoes, Wild Child's Turbo-Mule crashed and he was injured and left behind by his pack (as was their way). When Judge J.B. expressed kindness for the child, Wild Child began to mellow towards her and referring to her as 'Good Lady'.

The Dingoes' trail led through a tunnel and straigh towards The Lost City, where they were confronted by the last of the Old Ones, Zarko the Hunter, a mysterious figure with whom Wild Child was already familiar. Zarko intended to hunt down all the intruders except for Wild Child, because of his young age and brave nature. During a tense confrontation BraveStarr finally managed to convince Zarko that violence was not the way to live. Zarko decided to take care of Wild Child and soon adopted him. (Wild Child)

Wild Child attended school in Fort Kerium, where he found himself being teased about his Dingo upbringing by classmates Brian and Clorg. But when the entire town population save BraveStarr and Wild Child was struck down by the pollen of the Fever Flower, they had to plead with the Dingo Llama to grant them his medicine. (Call of the Wild)